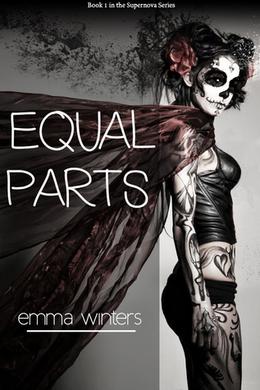 I quite liked this. I probably shouldn’t think this or at least not say it, but the attempt at creating a sociopathic character in Achilles was quite refreshing. Honestly I’m getting tired of all the carbon copy bad boys with tattoos, borderline abusive tendencies and daddy issues, and ironically, reading about an obsessed sociopath provided me a better treated heroine and welcomed variety.

Achilles was colourful, witty, and I was never quite certain what he’d say or do. I really appreciate Winter’s attempt at giving a different sort of flawed character to fall into the most conflicted kind of love with. He got a little too soft toward the end and Winter tried too hard to make it seem like he really wasn’t all that bad: not killing high profile people or really anyone else when they hadn’t been evil. She tried too hard to make it seem like there wasn’t truly that much to be conflicted about in the first place; he was just a bit misunderstood, but it really wasn’t necessary.

I wanted that confliction. I wanted to squirm and shy away in the face of a character I feel like I really have no business wanting. But I’ll forgive it because at least an attempt was made.

For all the “dark” things I’ve read I believe I’ve only ever read one other work where the author truly made an effort to give me sociopath; made him utterly insane but made no excuses for him. And that one isn’t even professionally published - or finished for that matter. But what little there is available to the public is a frigging masterpiece. I made the mistake of starting the story in public when I went to lunch one day and I was a quivering mess. I was stuck there for hours, curled up into myself on the chair, utterly unable to move.

But that’s a story for another time.

Praise the Lord - there was no insta-love!

Winters must’ve heard the collective weeping of the reading community’s souls and decided to spare us all that particular bullet. I will be forever grateful. Goodness knows if I roll my eyes any more I’ll live out the rest of my miserable days with a chronic migraine.

The only thing problematic about the plot was that if I understood correctly, they left Molten alive; I can’t see that ending well. Especially when Achilles is planning to partially retire.

Also, this wasn’t an issue so much as a little pet peeve of mine, but going into this knowing it was a NA novel - what’s worse, with a character who was supposed to be more twisted than I could wrap my feeble mind around, I expected explicit love scenes. I should be happy I got the scenes at all, but alas my lascivious spirit is a greedy wretch. Winters does deserve a pat on the back though; even though the scenes were a little vague, they were still kind of hot...but then again, that could just be my hormones.

Maybe I’ll find out one day (which is my coy way of saying this has a fair bit of reread value for me in case anyone was curious about that).

'So This Is An Emotional Read..'- Dreamlisy

'Alien Abduction Done Right!... I have read a good handful of alien books now, and not one has ever hit all the marks of a good alien abduction story..'- Dreamlisy