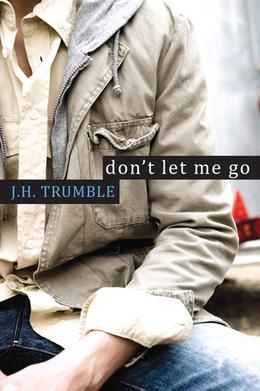 Some people spend their whole lives looking for the right partner. Nate Schaper found his in high school. In the eight months since their cautious flirting became a real, honest, tell-the-parents relationship, Nate and Adam have been inseparable. Even when local kids take their homophobia to brutal levels, Nate is undaunted. He and Adam are rock solid. Two parts of a whole. Yin and yang.

But when Adam graduates and takes an Off-Broadway job in New York—at Nate’s insistence—that certainty begins to flicker. Nate starts a blog to vent his frustrations and becomes the center of a school controversy, drawing ire and support in equal amounts. But it is the attention of a new boy who is looking for more than guidance that forces him to confront who and what he really wants.

J.H. Trumble’s debut, DON’T LET ME GO, is a witty, beautifully written novel that is both a sweet story of love and long-distance relationships, and a timely discourse about bullying, bigotry, and hate in high schools.
more
Amazon Other stores
Bookmark  Rate:

Buy 'Don't Let Me Go' from the following stores: