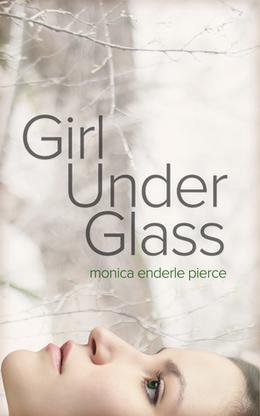 What do you do when you’re trapped between death and the devil? To protect her young daughter from a madman and a tyrant, Rachel Pryne must trust an enemy—one of the alien warriors who conquered Earth.

It is 2032, the Ohnenrai—Earth’s humanoid alien conquerors—orbit the planet, and Terran reproduction is failing. Rachel Pryne, a trained medic, is struggling to protect her seven-year-old daughter, Pearl, from the sexual predation of their penal colony’s leader. Having fathered the girl by rape, he now intends to take her on her eighth birthday, only six weeks away.

Then Rachel finds her unlikely champion—an injured Ohnenrai soldier who appears in her yard one stormy evening. She knows she may be choosing death over the devil in trusting this warrior, but she doesn’t know that her trust, and her DNA, will make her one of the most important and endangered people to ever set foot aboard an Ohnenrai starship.

Equal parts science fiction, suspense, and romance, Girl Under Glass moves from a post-apocalyptic wilderness in the American Pacific Northwest to a high-tech world aboard an alien starship furnished with all the stolen comforts of Earth. Readers meet Rachel Pryne, whose parents' lifelong and life-ending connection to the Ohnenrai has set her upon a path she never wanted to travel. And they're introduced to Ehtishem, an Ohnenrai soldier who exists to save his dying people, but who faces enemies from within and without his own military.

The only possible solution to the Ohnenrai’s extinction lies within Rachel, but all she wants to do is protect her daughter and see Earth’s alien conquerors go straight to hell.
more
Amazon Other stores
Bookmark  Rate:

'Girl Under Glass' is tagged as:

Similar books to 'Girl Under Glass'

Buy 'Girl Under Glass' from the following stores: