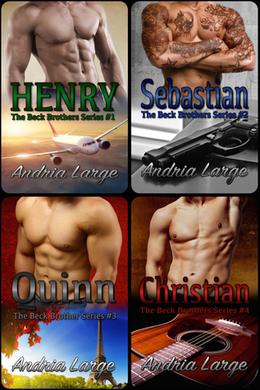 Nothing scared Christian Beck more than his brothers finding out that he was gay. How could he ever tell his three big, buff, women-loving brothers that he was into dudes? What if they thought it was disgusting? What if they disowned him? He loved his brothers so much and couldn’t bear to lose them. His only problem? He was in love with his best friend, who was now his boyfriend. He wanted to spend the rest of his life with this man. He hated having to hide their relationship, but what choice did he have? It was either hide his relationship or risk lose his family. Shea Dempsey’s life has been turned upside down and inside out. First, his parents and sister were killed a couple of years back, leaving him without any blood relatives. Now, the one person who he considered his only family told him that he was in love with him. The only issue? It was his best friend Christian, who’s gay. So when Christian told him that they could no longer be friends, Shea made a decision that would forever change him. He decided to become Christian’s boyfriend, because honestly, he would do anything to keep his best friend, even if that meant switching teams. As their relationship became more involved, Shea realized that he really enjoyed being with men…okay, maybe not all men, but definitely Christian. But he didn’t want to hide what they had together. The only problem was that Christian would not budge on the subject and refused to tell his family about them. Shea didn’t know how long he could live in secret. Will their years of friendship and love for each other be enough? Or will the ultimatum that Shea gives Christian end everything for good?
more
Amazon Other stores
Bookmark  Rate:

'The Beck Brothers Series' is tagged as:

Buy 'The Beck Brothers Series' from the following stores: