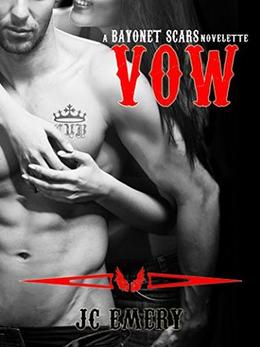 Mature Content Warning: The Bayonet Scars novels are a dark romance series which features graphic sexual content, sexual and physical violence, and foul language that is intended for a mature audience only. Each novel features a different couple, though it's not recommended that they be read out of order due to the series story arc.

HE REFUSES TO GIVE IN. SHE REFUSES TO GIVE IT UP.
Alexandra Mancuso knows all about regrets. She talked to the wrong person and started a war that’s ravaged her newly adopted motorcycle club family and threatens to cost Alex her life. Now, she’s cautious with the commitments she makes.
Ryan Stone, road captain for the Forsaken Motorcycle Club regrets nothing—except putting Cub in danger one time too many. The Forsaken Motorcycle Club has a plan to end the war with the Mancuso crime family and they need everyone’s head in the game. But Ryan can’t focus on the club when he’s so distracted by a certain reckless brunette. She gives him everything except for what he really wants.
Today, he refuses to take no for an answer and maybe, just maybe, this time Alex won’t be able to stand her ground.
True love always defies the odds.

All books by JC Emery  ❯

Buy 'Vow' from the following stores: