Alpha Blood: His Wildest Secret / Chosen By the Brothers / My Bear Chief 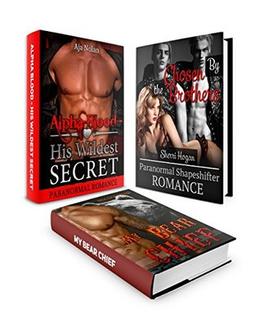 Nikolai is a vampire who was given the choice between immortality and death. He lives as a Vampire in seclusion and feeds on victims that would not be missed if they die. As he ages he finds a man named Kevin.

Kevin is a Vampire, but not a Vampire like Nikolai is. He was not bitten. He was poked and only a small amount of venom entered him. It was enough to make him more Vampire than human. Nikolai teaches him how to become what he is.

Love is another thing that Vampires don’t think of for many years. It takes 183 years for Nikolai to fall in love. It happened so fast and out of the blue. However, it is real for the both of them. Nikolai decides to turn her and make her his. Kevin has many objections on the matter. In the end Nikolai does turn his beloved. He does it gradually so it isn’t as overwhelming.

Will they be the Vampire couple made in heaven?

As a kind-hearted social worker, gentle Claudia had a shifter cub taken away from an abusive stepfather in order to protect him from harm. Now she’s at odds with her family and the entire bear shifter community in her mountain home. Fearing the wrath of the angry stepfather, she flees the mountains for the desert to in order to stay alive.

While catering a retirement party, and way out of her element, Claudia meets strong, sexy Misha in a chance encounter while shut in the pantry. He offers to share his tuna fish, and sparks fly immediately (along with the tuna).

What Claudia doesn’t know is that Misha has a secret of his own—one that is about to shatter the new life she’s built for herself here.

Will Misha and Claudia be able to ignore the sparks that light them on fire with each successive visit? Will the sparks be enough to protect Misha and Claudia from each other as well as the angry chief who wants them dead? Will justice push them away from each other of bring them together? And will good triumph over the cruelty that seems to loom inevitably around each and every desert ruin?

BOOK #3: ROMANCE: Chosen By the Brothers

Kelly swore she saw a shifter when she was a child and spent her whole life chasing myths and fantasies, wanting to prove they were real. Heading down to the Rainforest in Central America where rumors of shifters could be found, she was determined to prove she wasn't insane and had seen a shifter as a child.

Travis and Tyler are twins, identical brothers, who are determined to thwart Kelly's plans and in desperation, kidnap her.
Tyler is impulsive, and bites Kelly, to turn her so she will have to keep their secret.
Travis has to figure out how to save her, once he realizes she's in pain and fighting the change. Will Travis be able to find a solution in time, and will Kelly agree to let them help her?

Travis is the more logical of the two brothers. Who doesn't like to do anything without planning it, and now has to figure out how to save her, so she doesn't fight the first turn and die in their arms.

Travis and Tyler both want her and will do anything to get her to stay, including share her between the two of them. Can Kelly handle both of them at once? Will she agree to stay if she survives the change?

Can Travis and Tyler save her, or will they lose her?

Getting Your FREE Bonus
Download this book, and find "BONUS: Your FREE Gift" chapter at the end.
more
Amazon Other stores
Bookmark  Rate:

'Alpha Blood: His Wildest Secret / Chosen By the Brothers / My Bear Chief' is tagged as:

Similar books to 'Alpha Blood: His Wildest Secret / Chosen By the Brothers / My Bear Chief'

More books like 'Alpha Blood: His Wildest Secret / Chosen By the Brothers / My Bear Chief'   ❯

Buy 'Alpha Blood: His Wildest Secret / Chosen By the Brothers / My Bear Chief' from the following stores: