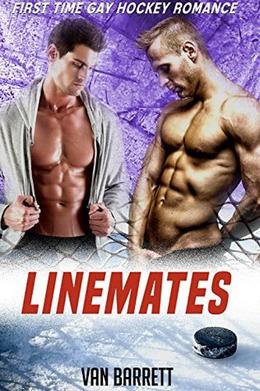 A secret that threatens everything.

Callan Jones is a bright new hockey star having the time of his life -- and the hard-hitting, goal-scoring, trash-talking winger has the whole league riled up in a hissy-fit. There's only one thing could ever trip up the invincible youngster: the fact that he likes guys . Good thing he's managed to keep that under wraps ... right?

But Callan's controversial tactics have made a few enemies closer to home. When he gets caught in a compromising situation, his team coldly cuts their ties and sends him packing to Chicago -- a team that already hates his guts. Now it's only a matter of time until they find out what he's done.

Can Callan ever fit in with his new team, or will his career be cut short by disgrace? One thing's for sure. A crush on his new captain -- hard-working hunk and undeniable straight guy , Tyler Vance -- is the last thing he needs ...

Ever since Tyler Vance lost the Cup by a goal, his team's been caught in a downward spiral -- with him at the helm. The fans gossip that the captain's heart isn't in hockey anymore. Who knows? Maybe they're right.

When his team trades for fiery winger Callan Jones, Vance hopes the team's finally found the piece he's lacked all along. Sure, 'Jonesy' can be a thorn in the side -- and his new teammates won't forget their bad-blooded history so easily.

But one look at his muscle-bound bod tells Vance all he needs to know: Callan takes his training seriously. And his play on the ice speaks for itself. For the first time in ages, Vance feels good about his chances. All he has to do is make sure Callan keeps his head out of trouble and help him mesh with the boys.

Is Callan the missing ingredient that Vance has been waiting for? Will Vance ever find out why, exactly, Callan was traded in the first place ... and will it change everything ?

'Linemates' is tagged as:

Buy 'Linemates' from the following stores: