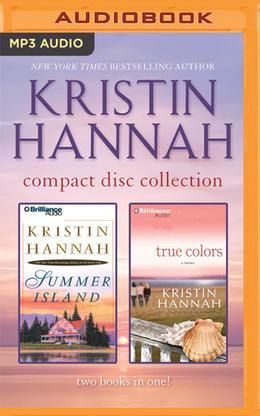 SUMMER ISLAND: Thirty-four year old Ruby Bridge is a not-too-successful comedienne who uses her mother, a nationally-syndicated "moral and spiritual counselor" as the main fodder for her cynical, rather bitter humor. Her mother Nora, long divorced from Ruby's father, is a woman whose past is just about to catch up with her—in the form of blackmail by a former lover.

After an accident (an attempted suicide?) Ruby returns to care for her stricken mother—bitterly resenting the fact that once again her mother's life has colonized hers. When she is approached by a publisher to write a biography of her mother, Ruby is desperate for the princely sum offered. Yet her research into her mother's past reveals a woman very different from the one Ruby expected. And what began as "mommy dearest" ends as a love story—not only between mother and daughter, but involving two very different men who play a key role in linking the past to the present.

TRUE COLORS: The Grey sisters had only each other when their mother died years ago. Their father provided for them physically on Water's Edge, the ranch that had been in their family for three generations, each of them however, longed for their father's love.

Winona, the oldest, knew early on that she could never get it. An overweight dreamer and reader, she didn't exhibit the kinds of talents and strengths her father valued.

Vivi Anne, the youngest, had those things. And it was Vivi Anne who only ever saw a glimmer of their father's approval.

When Vivi Anne makes a fateful decision to follow her heart, rather than take the route of a dutiful daughter, events are set in motion that will test the love and loyalties of the Grey sisters.
more
Amazon Other stores
Bookmark  Rate: