Love in the '80s: A New Adult Novella Anthology 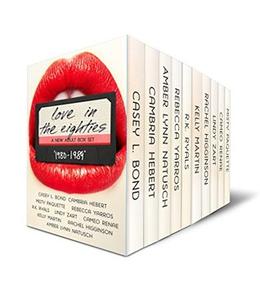 Before the internet…before sext messages, selfies, like buttons, and d**k picks…epic loves and broken hearts played out offline, on mixtapes that became the DIY soundtracks of a generation.

Love in the 80s: A New Adult Mix is a collection of ten contemporary romance, new adult, stand-alone stories set in the 1980s.

Written by award-winning and bestselling authors, the title of each love story is a hit song from the year that the novella represents. The totally awesome authors who were a part of this project and the titles of their stories are:
1980: You Shook Me All Night Long by Casey L. Bond
--> one concert
1981: Jessie's Girl by Lindy Zart
--> one road trip
1982: Maneater by Cambria Hebert
--> one maneater
1983: Cruel Summer by Amber Lynn Natusch
--> one cruel summer
1984: Against All Odds by Rebecca Yarros
--> one rock star
1985: Careless Whisper by Misty Paquette
--> one week and a big secret
1986: Why Can't This Be Love by R.K. Ryals
--> one spring break
1987: (How Do I Get You) Alone by Cameo Renae
--> one cabin getaway
1988: Need You Tonight by Rachel Higginson
--> one night out
1989: Once Bitten, Twice Shy by Kelly Martin
--> one act of revenge

A portion of every full-priced sale of the anthology goes to DirectRelief.org: Direct Relief is a humanitarian aid organization, active in all 50 states and 70 countries, with a mission to improve the health and lives of people affected by poverty or emergencies. Direct Relief’s work earns wide recognition from independent charity evaluators, including a 100% fundraising efficiency rating from Forbes, the No. 1 spot on Charity Navigator’s list of the “10 Best Charities Everyone’s Heard Of,” and inclusion in Fast Company’s list of “the world’s most innovative nonprofits.”

Love in the 80s: A New Adult Mix was created by UTOPiAcon founder, Janet Wallace, and is co-produced with Regina Wamba (together they are WaWa Productions).
more
Amazon Other stores
Bookmark Rate Book

Similar books to 'Love in the '80s: A New Adult Novella Anthology'

More books like 'Love in the '80s: A New Adult Novella Anthology'   ❯

Buy 'Love in the '80s: A New Adult Novella Anthology' from the following stores: