King of My Heart 3 : The Finale 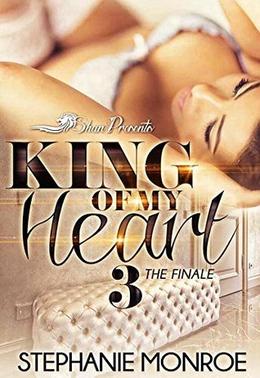 A Man Does Not Need A Crown To Be A King. He Only Needs The Love And Loyalty Of The Woman He Can Call Queen.

After finding out Messiah, Maliyah, and Taj were kidnapped, Alonzo, Andres, and Demarco set out to get the love of their lives back. Alonzo finds himself in deep water when he finds out he has a now angry father-in-law, Luciano Milani. Alonzo has to prove to Luciano that he loves Messiah and she is the best thing in his life. Will he convince Luciano that his words are true or will his actions reveal that Luciano was right from the beginning.

Maliyah has been with Demarco for almost four years and believes it is a dream that she doesn’t want to wake up from. Demarco is her perfect knight in shining armor who she wants to be with for the rest of her life. Slowly, Demarco’s truths are brought to the light. Will Maliyah stay with her almost-perfect boyfriend or get the memo that fairytales doesn’t exist.

Since the kidnapping, Andres doesn’t trust Taj. Taj being fed up with Andres’ attitude, harshly removes herself from the relationship and pushes Andres in the arms of Genesis “Blanco” Michaels. As Andres and Blanco’s relationship blossom, Taj begins having second thoughts. She finds out the saying ‘you never know what you have until it’s gone’ is true and wants a second chance. But is it too late?
Find out in the finale of King of My Heart how everything unfolds.
more
Amazon Other stores
Bookmark  Rate:

Similar books to 'King of My Heart 3 : The Finale'

Buy 'King of My Heart 3 : The Finale' from the following stores: