Man Walks into a Bar: A Trio of Short Stories 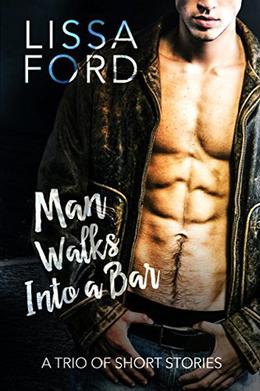 Insta-lust. Secret attractions. Boozy bar hookups. They're all here in a trio of contemporary m/m romances perfect for a night in.

New Yorker Jake Winthrop gets nailed for speeding along the rural back roads of eastern North Carolina. But when he again encounters Landry Blue, the hot-as-hell trooper who tagged him, at the local watering hole, let’s just say the lawman has more on his mind than keeping the peace. Once Jake gets a taste of Blue’s brand of Southern hospitality, he starts wanting more. Can Jake convince Blue to give their relationship a shot? Or does Blue want Jake to keep on driving, right out of his life?

Living in a small town meant that Bo Hinkle had to put up with childhood nemesis, Hank Womack, his whole life. But when Womack steals the Hinkle family’s championship chili recipe and uses it to win the village’s famous chili cookoff contest for himself, the line between sort-of-kind-of-hot-asshat and downright shady has been crossed. After a lifetime of rivalry, Bo vows teach Womack a lesson he won’t forget.

Garrett Ziegler’s life was upended when a workplace romance derailed a promising career in finance. So it’s just Garrett’s luck when he learns the cute Los Angeles hipster he hooked up with for a mindblowing one-night-stand turns out to be the founder of a private equity firm, and said firm was in the final stages of interviewing Garrett for his dream job. Garrett has to convince venture capitalist Anthony Sendejo that their encounter was a random accident, and that Garrett’s romantic history wasn’t repeating itself. Trouble is, Tony isn’t convinced. And Garrett’s words ring hollow because as tempting as the job is, Tony is even more enticing. Is Garrett about to screw up his life again because he slept with the boss?

'Man Walks into a Bar: A Trio of Short Stories' is tagged as:

Similar books to 'Man Walks into a Bar: A Trio of Short Stories'

More books like 'Man Walks into a Bar: A Trio of Short Stories'   ❯

All books by Lissa Ford  ❯

Buy 'Man Walks into a Bar: A Trio of Short Stories' from the following stores: