The Complete Boxed Set: The Wolf, Hidden Moon, Once Upon a Haunted Moon, and Wynter's War (The Keeper Saga) 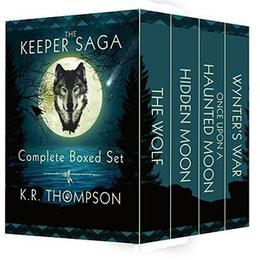 Discover the legend and adventure of the Keeper Saga.

The Wolf:
Before the legend of the Keepers, came the story of the Wolf.

Once upon a time, there lived a man whose fate would rest with two sisters. One will hold his heart. With her, he will find a love that will last forever, though it will come with a price.

From the other sister, he will learn fortitude as he discovers that she holds the power to destroy all he holds dear. For as easily as one sister captures his heart, the other will trap his soul.

Hidden Moon:
The secret of their people had been hidden for hundreds of years. A legacy and history carefully kept by six Guardians thru each generation. They are known as Keepers.

One girl will change their future.

Seventeen year-old Nikki Harmon doesn't realize her life is going to change when she moves to a small town in Virginia. As she discovers the Indian reservation that borders her new home, she soon realizes there is magic waiting in the dark shadows of the forest and that myths and legends she had never believed in...are real.

When she meets Adam, the leader of the six boys known as Keepers, her life will never be the same again. Her dreams become haunted by the mournful howls of wolves and visions of both the past and the future.

Befriended by Brian, she soon becomes torn by her feelings for both him and Adam while she learns that she must trust her own heart and discover a strength inside herself that she doesn't know that exists.

In her search for the truth, she will unearth the deadliest secret of all.

Once Upon a Haunted Moon:
The year is 1765, when eight-year old Eleanor Brown begins the fatal journey that leaves her orphaned. Befriended by a wolf and adopted by an Indian tribe, Ella soon learns to believe in the magic around her. Though she grows up to find a love that will endure all time, she must also find the courage within herself to live without it as she prepares her people for the return of the Fire Witch.

When history falls into legends nearly forgotten, the Keepers must search for the truth and find the answers before the same evil that nearly destroyed their people comes back for her revenge.

Will the power of The Wolf be enough to save them, or will the fate of their ancestors be their own destiny?

Wynter's War:
Nikki's nightmares are back and they are worse than ever. In a thick blanket of fog, a beautiful woman walks the Deadlands, bringing a dark, strong evil unlike anything the forest has ever seen, threatening to destroy all that the Keepers are bound to protect.

As the guardian of Wynter's book, Nikki discovers a new magic held within its pages and a power that will affect good and evil magic alike. Hoping the secret to defeating Crow Woman lies in the book's knowledge, the Keepers join forces with an unlikely ally, but will Nikki and the Keepers be strong enough to win the battle over evil--or will they be lost to it forever?
more
Amazon Other stores
Bookmark  Rate:

'The Complete Boxed Set: The Wolf, Hidden Moon, Once Upon a Haunted Moon, and Wynter's War (The Keeper Saga)' is tagged as:

Similar books to 'The Complete Boxed Set: The Wolf, Hidden Moon, Once Upon a Haunted Moon, and Wynter's War (The Keeper Saga)'

More books like 'The Complete Boxed Set: The Wolf, Hidden Moon, Once Upon a Haunted Moon, and Wynter's War (The Keeper Saga)'   ❯

Buy 'The Complete Boxed Set: The Wolf, Hidden Moon, Once Upon a Haunted Moon, and Wynter's War (The Keeper Saga)' from the following stores: