by Pearl A. Gardner 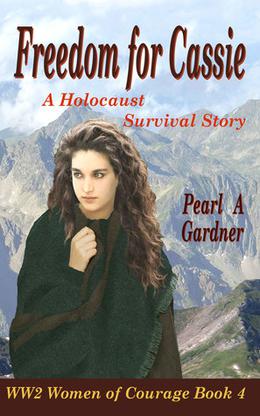 1973 – The hidden terrors of Cassie’s past have prevented her from embracing life as fully as she might have. The Polish immigrant leads a quiet life as a nurse but when her friend’s daughter asks to interview her for a Remembrance Day feature in the local newspaper; the long forgotten memories begin to surface and help to set her free.

1943 - After an outrageous abuse by a German soldier, Cassie escaped from the Lodz ghetto in Poland. A group of partisans found the sixteen-year-old and her younger sister and helped them to cross Europe in an audacious plan to reach safety.

Travelling thousands of miles through enemy territory, Cassie endured some terrifying ordeals and survived on starvation rations. She lived in constant fear of patrols and ambushes, but her world changed when a young Austrian Jew befriended her.

Under the extreme conditions of trying to escape the holocaust, friendship soon turned to love, and Gunter became the focal point of her chaotic life.

Was Cassie resilient enough to travel the infamous freedom trails to reach the safety she craved? Would Gunter give up his partisan life to join her?
more
Amazon Other stores
Bookmark  Rate:

'Freedom for Cassie' is tagged as:

Similar books to 'Freedom for Cassie'

Recent books by Pearl A. Gardner

Buy 'Freedom for Cassie' from the following stores: