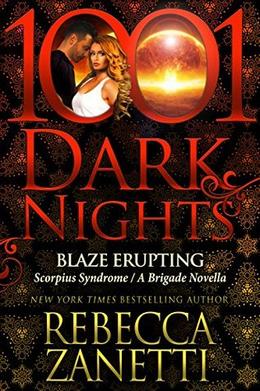 Hugh Johnson is nobody’s hero, and the idea of being in the limelight makes him want to growl. He takes care of his brothers, does his job, and enjoys a mellow evening hanging with his hound dog and watching the sports channel. So when sweet and sexy Ellie Smithers from his college chemistry class asks him to save millions of people from a nuclear meltdown, he doggedly steps forward while telling himself that the world hasn’t changed and he can go back to his relaxing life. One look at Ellie and excitement doesn’t seem so bad.

Eleanor Smithers knows that the Scorpius bacteria has and will change life as we know it, but that’s a concern for another day. She’s been hand-picked as the computer guru for The Brigade, which is the USA’s first line of defense against all things Scorpius, including homegrown terrorists who’ve just been waiting for a chance to strike. Their target is a nuclear power plant in the east, and the only person who can help her is Hugh, the sexy, laconic, dangerous man she had a crush on so long ago.

**Every 1001 Dark Nights novella is a standalone story. For new readers, it’s an introduction to an author’s world. And for fans, it’s a bonus book in the author’s series. We hope you'll enjoy each one as much as we do.**
more
Amazon Other stores
Bookmark  Rate:

'Blaze Erupting' is tagged as: