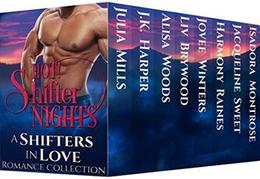 Shifters in Love brings you 8 brand new shifter romance stories to heat up your cold winter nights in our February Box Set edition. Curl up on the couch and let us take you on an emotional journey of love.

Alisa Woods - Tempted
Tajael is an angeling of the light—he strives for Virtue, but his human body is vulnerable to all the Sins... Lust most of all. If he can keep from Falling, he'll be allowed to take his vows. But it's an angeling's nature to love and protect humanity... and nothing he's been taught prepares him for the Temptation ahead...

Dragon Bewitched: A Viking Dragon Fairy Tale - Isadora Montrose
Modern dragon knocks up beautiful thousand-year-old Viking witch. Freya has been waiting a thousand years to be revenged on the Viking dragons who stole her sisters and cursed her with perpetual youth. How can she give up her vengeance in exchange for her enemy’s love and a child?

Wrenches, Curses, and Cupid’s Arrow - Jovee Winter
Coco Padfoot is a two-hundred year old lone wolf and that’s just the way she likes it, but when the magick of the blue moon infuses her little sleepy town three witches determined to see her wolf mated cast a love spell. It was just supposed to be simple magick, nothing major, except the man fate has in store for her is far more than what he seems. In fact, he might be the key to unraveling one of the shifters worlds most dangerous secrets...

Taming Her Bear - J.K. Harper
Bear shifter Beckett North can hardly control his inner beast on the best of days—until he meets sexy little spitfire Pix Camden. She somehow soothes his wild, angry side. But when he realizes she's keeping a really big secret from him, his pissed off bear might roar out of control for good.

Hades’ Halo - Julia Mills
Hell hath no Fury like Hades having a bad day, then Hope arrived... The Underworld will never be the same.

Bil-Lion-Aire Protector - Harmony Raines
After being cruelly let down by her first husband, Jen, mother of two wonderful boys, has found happiness with billionaire property tycoon, William O’Donnell. He is the man of her dreams—even her most erotic ones.
Will’s also a lion shifter, who promises Jen the kind of forever love she could only dream of after her husband walked out. To Will, his mate and her boys, Jack and Cody, are the most important thing in the world. So when they are kidnapped, a man has to do what a man has to do—find them, at all cost!

Jacqueline Sweet - Reunited in Bearfield
Olivia McGregor swore she'd never return to Bearfield, but when her family needs her help she gets a second chance at love with the bear shifter who stole her heart.

All books by Harmony Raines  ❯