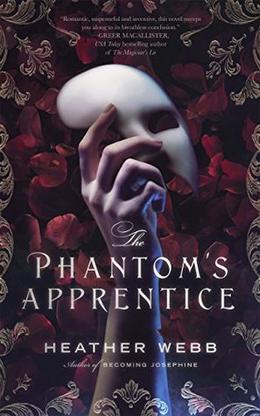 In this re-imagining of Phantom of the Opera, meet a Christine Daaé you’ve never seen before…

Christine faces an impossible choice: be a star at the Paris opera as Papa always wanted, or follow her dream—to become a master of illusions. First, she must steal the secrets of the enigmatic master who haunts her, survive a world of treachery and murder, and embrace the uncertain promise of love. To succeed, she will risk her life in the grandest illusion of all.

Christine Daaé sings with her violinist father in salons all over Paris, but she longs to practice her favorite pastime—illusions. When her beloved Papa dies during a conjurer’s show, she abandons her magic and surrenders to grief and guilt. Life as a female illusionist seems too dangerous, and she must honor her father’s memory.

Concerned for her welfare, family friend Professor Delacroix secures an audition for her at the Opéra de Paris—the most illustrious stage in Europe. Yet Christine soon discovers the darker side of Paris opera. Rumors of murder float through the halls, and she is quickly trapped between a scheming diva and a mysterious phantom. The Angel of Music.

But is the Angel truly a spirit, or a man obsessed, stalking Christine for mysterious reasons tangled in her past?

As Christine’s fears mount, she returns to her magical arts with the encouragement of her childhood friend, Raoul. Newfound hope and romance abounds…until one fateful night at the masquerade ball. Those she cares for—Delacroix, the Angel, and even Raoul—aren’t as they seem. Now she must decide whom she trusts and which is her rightful path: singer or illusionist.

To succeed, she will risk her life in the grandest illusion of all.
more
Amazon Other stores
Bookmark  Rate:

'The Phantom's Apprentice' is tagged as:

Similar books to 'The Phantom's Apprentice'

Buy 'The Phantom's Apprentice' from the following stores: