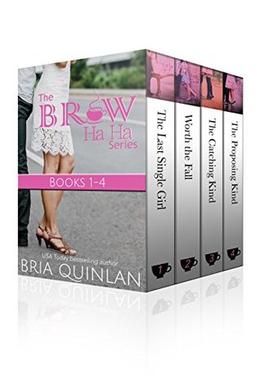 THE LAST SINGLE GIRL
The internet gave Sarah her Kate Spade bag and that apartment outside Washington Square. Now maybe it can find her Mr. Right. Internet dating....What could possibly go wrong?


WORTH THE FALL
When Kasey loses her job, her apartment, and her guy in one day she just wants to start a new life and be a guy-free-zone. But, when one thing after another goes wrong, Mr. Right might be the one good thing worth taking a chance on.


THE CATCHING KIND
Hailey thought she was worth more than a straight flush until her agent loses her in a bet. Now she’s stuck being the fake girl-next-door beard for America’s Sexiest Athlete. Are arrogance and good looks a match for this stubborn Quirky Girl?


THE PROPOSING KIND.
Connor may have proposed. Or maybe not.
Now it's up to Hailey and her Brew Crew girls figure it all out. Ridiculousness, shenanigans, arguments, and reconciliations ensue…because, Quirky Girl Power!

But at the end of it all, is Hailey ready to marry America’s Most Eligible Athlete or is time to call a delay on that particular play?
more
Amazon Other stores
Bookmark  Rate:

All books by Caitie Quinn  ❯