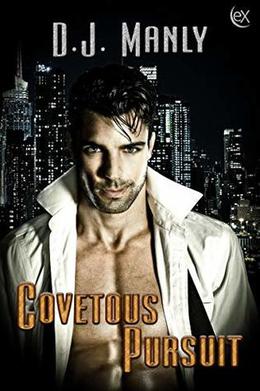 A few years ago, Detective Jackson Blue made a promise to a teenage street hustler named Tyler. He told him that he would protect him in exchange for information, but in spite of his effort, Tyler ended up dead. Jackson is convinced that his pimp, Manny the Saint, is responsible but has no proof. When a temper problem lands Jackson yet another suspension; Jackson hits the streets in disguise to try and find a lead.

Blake Wellington is a dancer, who hustles on the side, at the club owned by Manny the Saint. He’s known Manny since he was a teenager and figures that Manny saved his life. When he is approached on the street one night by a raggedly man with a pocket full of cash, he threatens to pepper spray him. In spite of the money the vagrant is offering, Blake is turned off at the prospect of having sex with him. With the promise that the man will take a shower, Blake reluctantly agrees, having no idea of the surprises that await him.

Covetous Pursuits is a story of one man’s quest to find a killer, with a few twists and turns along the way, and some very hot sex that may or may not, turn out to mean much more.
more
Amazon Other stores
Bookmark Rate Book