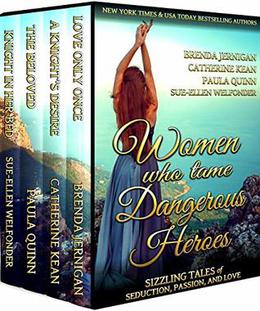 Welcome to WOMEN WHO TAME DANGEROUS HEROES, a 4-author collection inspired by our previous set, DANGEROUS HEROES (still available). This time we've gathered our boldest, most daring heroines. Join them across more than 1,140 sizzling pages of seduction, passion, and love. Shrinking violets won't be found here - only strong and passionate women brave enough to chase their dreams: happily-ever-afters with the men they desire.

Bitter Betrayal - Jonathan Hird, Earl of Longdale, wants sweet revenge on Lady Elizabeth Trent for leaving him at the altar. After a couple of years at sea with cut-throat pirates, Jonathan returns to England and forms a perfect plan for Sweet Revenge.

Lady Rosetta Montgomery is on her way to her wedding when she's kidnapped by a rider dressed all in black. She discovers her abductor is Lord Ashton Blakeley, her first and only true love, who left her to go on Crusade. Ash is a changed man now, with disfiguring scars and agonizing secrets. As rumors of lost Anglo-Saxon gold and treachery unfold, and Rosetta grows to understand the man Ash has become, will she help him fight for their love, or will the danger surrounding the hidden riches cost them all that they treasure?

The Beloved takes place in historical Wales and a few otherworldly realms where you will meet a sacred tree with the ability to speak, an evil siren with the power to seduce, and a tiny water sprite with the courage of an army. You'll travel to castles and brothels and faerie kingdoms where magic abounds, hearts will be tested, and true love tried.
But only if you believe.

Knight in Her Bed

Sizzling passion, danger, and forbidden love set medieval Scotland ablaze when Highland chieftain Donall MacLean is captured by a feuding clan. Bent on revenge, his enemies are sworn to his swift demise even as their lairdess, Lady Isolde MacInnes desires something else entirely. But an ancient curse and a dark-hearted villain thwart them as they are forced to choose between clan loyalty and love - before it is too late.
more
Amazon Other stores
Bookmark Rate Book