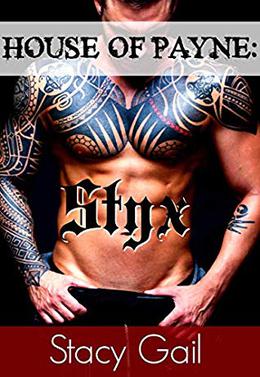 Sydney used to make plans. All her life she’d trained to be a ballerina, but that “plan” had turned out to be nothing more than a pipe dream. Reality now consisted of hunting down petty thieves and refusing to make any more pie-in-the-sky plans for her life. That’s why she never approaches the sexiest man she’s ever laid eyes on. Never again would she be crushed by pointless dreams.


Fate, however, has plans for her.


Styx Hardwick isn’t big on plans. As a tattooist at House Of Payne, he’s the black sheep in a family full of pragmatic cops. Now that his twin brother’s getting hitched, all eyes turn to him, the last of the single Hardwick siblings. Getting through his twin’s wedding is gonna be hell.


Or so he thinks.


When a pocket-sized goddess crashes into him with terror in her eyes, Styx’s world turns upside-down. Even scared out of her mind, Sydney is still the hottest thing to have ever graced his life. He offers her a deal—pretend to be his girlfriend until the wedding, while he does his damnedest to protect her from the danger closing in.


As a plan, it’s almost foolproof.


***This standalone contemporary romance contains mild violence, a dash of instalove, and multiple sex scenes in lots of fun and possibly gravity-defying positions. No cheating, no love triangles, no cliffhangers. HEA guaranteed. Due to adult language and sexual content, this book is not intended for people under the age of eighteen***
more
Amazon Other stores
Bookmark Rate Book

Buy 'House of Payne: Styx' from the following stores: