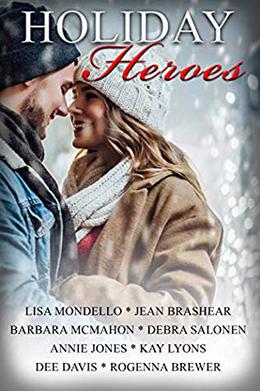 'Tis the Season for Heroes..

Enjoy this collection of Holiday Heroes from some of your favorite authors. This festive set contains eight romances inspired by the holiday season.

DAKOTA BLUES by Lisa Mondello
Hawk McKinnon has been waiting for Regis to marry him ever since she stepped foot into his life. Now that they're expecting a baby, he's determined to finally make her his wife. But Regis has fears Hawk can't understand. As Hawk works to make Regis believe in the power of love and family, will he succeed in making Regis his bride?

BE MINE THIS CHRISTMAS by Jean Brashear
The man he’s become is not the boy she once knew—and he may never forgive her, once he knows the secret she’s been concealing.

THE CHRISTMAS LOCKET by Barbara McMahon
Zach doesn't find the homecoming he expects when he pulls out all the stops to get home for Christmas. Chasing after Caitlin is not how he planned to spend his holiday. Things have a way of going off track, unless a determined man can find a way to change the past. It’ll take a miracle to bridge the gap between them. Will the locket prove to be the key? Or will the new year find them going their separate ways once again—this time forever?

BLACK HILLS OUTCAST by Debra Salonen
Rachel Grey’s career re-boot depends on her ability to woo backwoods artisan Rufus Miller out of his self-imposed isolation. Their instant connection brings unexpected benefits—like falling in love. Until Rufus’s past—and true identity—threatens to ruin everything. Can two lost souls ever believe that love is the reason for the season?

THEIR FIRST NOEL by Annie Jones
Corrie Bennington's Christmas list: Find her father, see snow, give grumpy but gorgeous Andy MacFarland a magical Christmas. Andy MacFarland only has one wish: To reopen the Snowy Eaves Inn by Christmas Eve. There's no time for gingerbread houses, snowglobes, tree lighting... or Corrie. Until his matchmaking little sister intervenes...

SECRET SANTA by Kay Lyons
Ty McGarretty must face the inevitable. His Cessna is going down in the Alaskan bush and there’s nothing he can do but pray for a miracle. From out of nowhere she appears. Beautiful, daring, a woman he finds himself drawn to after he wakes up in a secret off-the-grid compound. Who are these people? Where did they come from? Why are they here? A former soldier, Ty knows something isn’t right and it’s his duty to gain intel and unearth the many secrets being kept. Learning the truth may mean never making it home, but there is no other way to discern if his rescuer is an “angel”—or a terrorist in disguise.

STILL OF THE NIGHT by Dee Davis
In the still of the night... Christmas is coming... and Jenny Fitzgerald couldn't care less. She's getting divorced, and her life is in tatters. And just when she's thinking it couldn't possibly be worse, her husband is killed on the job, an undercover operation gone bad. In the midst of her grief, Jenny is confronted with a killer. A hunter who will stop at nothing to see her dead…

THE MARINE'S LAST CHANCE CHRISTMAS by Rogenna Brewer
Marine Raider Bruce Calhoun is assigned to his hometown recruiting station for the holidays. Fresh out of rehab from his injuries, he’s ready to fight for what matters most––Rescue Swimmer Mitzi Zahn. It was a mistake to call off their wedding. And his last chance to win her back may prove to be his toughest fight of all...

'Holiday Heroes: A Christmas Romance Anthology Collection' is tagged as: