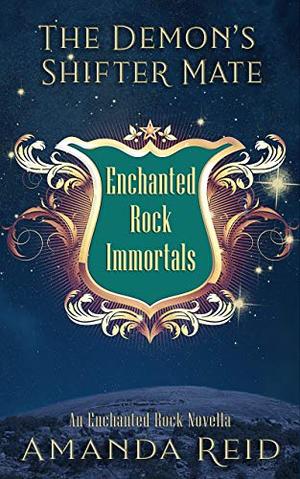 Sometimes you have to break the rules for love…

Calum Stavros is a man who lives by the rules. As North American Council Security Director, he has a whole manual of regulations to fit every situation, including one forbidding relationships between manager and employee. But rules don’t seem to apply to the beautiful and brash wolf shifter Chip Foster, on loan to the agency for a sensitive investigation threatening to bring down the council. She’s scented his secret, and now she could bring him down, too.

After a grueling case, tracker extraordinaire Moonlight Lily “Chip” Foster should’ve been sunning herself on a beach, margarita in hand. Instead, she’s in a place she never wanted to be—Enchanted Rock, home of the stuffed-shirt bureaucrats, just like strait-laced Director Stavros. Following the rules has never been her style, but if she does, she can continue tracking what seems to be the impossible rise of a fanatic threatening the paranormal world. Now, if only she could keep her nose on the trail, rather than sniffing around the handsome Director...

Demons and Vampires. Elfs and Fairies. Mages and Witches. Werewolves and Dragons. Psychics and Telekenetics.

These magical beings and more exist, rubbing shoulders in their daily lives with unsuspecting humans. But it doesn’t happen without order. Millenia ago, the clans—Sanguis, Fae, Magic, Shifter and Human Paranormal—wisely formed a Council to maintain that order. The end? To ensure the worlds of human and paranormal beings didn’t collide and break out into a war that would result in the extermination or subjugation of either.

As human civilization progressed, the first council formed the All Clan Charter at the natural vortex in Great Zimbabwe giving each clan a voice in the administration of affairs both between the clans and with humans. Next, Asia formed its council at Chengtu Vortex. Then European at Warel Chakra Vortex. North America came next at the natural vortex humans called Enchanted Rock in what today is known as Texas.

Now, thriving communities of paranormal beings exist in and around the granite outcropping. Humans scrabble over the dome, not suspecting an entire city exists within its confines: the North American Council and all its departments—Legislative, Administrative, Security, Medical, Vortex Transportation, and Legal, plus restaurants, clan hotels, and shops catering to the paranormal crowds.

Also under that dome? Intrigue, politics, and most importantly, love.

These are the stories of The Enchanted Rock Immortals.
more
Amazon Other stores
Bookmark  Rate:

'The Demon's Shifter Mate: An Enchanted Rock Immortals Novella' is tagged as: