A Thimbleful of Honor 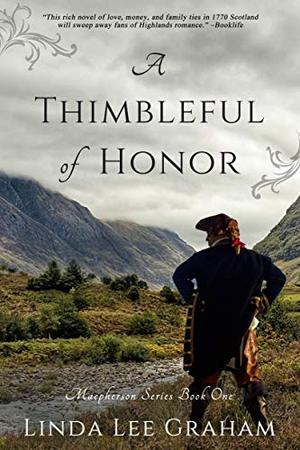 "Years of resentment and a passionate romance throw a man into turmoil when he returns to the Scottish Highlands in this novel . . . intriguing until the end" ~ Kirkus Reviews

"With two multilayered protagonists and a strong foundation laid for sequels, this eloquent mix of historical fiction and romance will appeal to fans of both genres." ~ BookLife Reviews


Before his father offered to shelter Wylie's two sons, nothing could lure Wylie Macpherson back to Scotland. But after a bitter twenty-five-year exile, his homecoming proves even harder than anticipated. Instead of the scorn he expected, he's faced with the relief of a struggling village long awaiting his return. All Wylie wants is to retreat to his ship, yet the tug of his memories and responsibilities is difficult to ignore.

Having lost one man to the sea, Anna Macrae is cynical of men chasing dreams across oceans when everything one could want—family, community, friends—can be found in the Highlands. Though preoccupied hiding her father's infirmity while managing his business in his stead, she can't help but notice Wylie's sons need a parent, and their father is too absorbed in his own grief and anger to notice. As she grows close to them, her traitorous heart begins to spin fantasies of a life not meant to be.

Blindsided by a barrage of painful memories, Wylie pays little heed to the heat building between himself and Anna until he finds he can think of nothing else. Will he flee once again, or will he fight one more battle to claim the sweetest of prizes?

A poignant story of love, loss, and coming home, A Thimbleful of Honor is set in the heart of Scotland's Highlands, twenty-five years after the 1745 Jacobite rebellion.
more
Amazon Other stores
Bookmark  Rate:

'A Thimbleful of Honor' is tagged as:

Similar books to 'A Thimbleful of Honor'

Buy 'A Thimbleful of Honor' from the following stores: