On the Eve of Forever 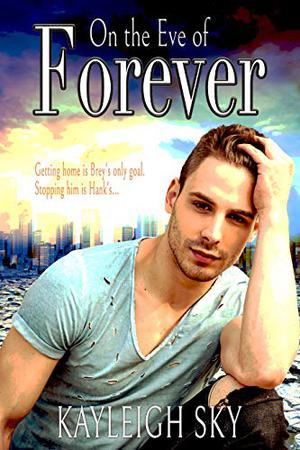 Brey would rate himself least likely to survive a zombie apocalypse. Yet here he is. True, it was a viral apocalypse not zombies, but still…

Gone from spoiled rich kid to convict in sixty seconds flat. Stuck in prison with his family three thousand miles away.

But not for long.

Soon everyone is on the run from the virus. When guards set the convicts loose, Brey vows to reunite with his family no matter what it takes. So what if he sucks at keeping promises? He’s damned if he’s breaking this one.

Getting home is his only goal. Too bad there’s somebody who won’t make that easy for him…

Hank is a cop. He enforces the law. Even the toxic ones.

Waterfall, a small city that made it through the apocalypse, survives on the sale of human beings. Nobody’s getting in the way of Hank’s plans to stop them.

Nobody but the rich kid he once arrested for murder. Now the guy’s up for sale, and Hank’s plans go south in a hurry. On the spot to make a quick decision, he buys him.

What else can he do?…

Dark with snark and crazy romantic. Want to tag along with Brey and Hank while they figure out how to reconcile the irreconcilable? For heart-stopping drama, heart-breaking scenes, swoon-worthy love, and a happy-ever-after to last a lifetime, read now or buy On the Eve of Forever and enjoy!

NOTE: On the Eve of Forever was previously published as Backbone by Pride Publishing. It has been rewritten and expanded by approximately 25,000 words. See Author's Note for additional information.
more
Amazon Other stores
Bookmark  Rate:

'On the Eve of Forever' is tagged as:

Similar books to 'On the Eve of Forever'

More books like 'On the Eve of Forever'   ❯

All books by Kayleigh Sky  ❯

Buy 'On the Eve of Forever' from the following stores: