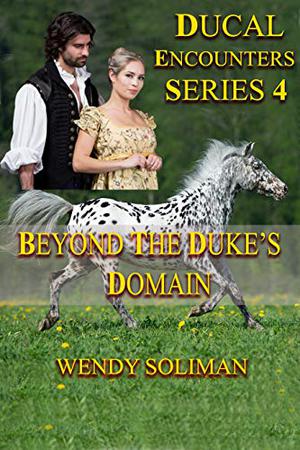 Within the safe environment of the Duke of Winchester’s opulent estate, Ariana is finally reunited with her brother Raphael, a situation that Amos, the duke’s brother, worked relentlessly to bring about.
Ariana and Raph barely have time to become reacquainted before learning that the man responsible for forcibly bringing Ariana and her sister to England is still plying his trade. Amos and Raph agree that he must be stopped, but without exposing Ariana to danger.
Lucy Boyd is flattered by the attention she receives from Raph. But a life of humdrum domesticity doesn’t form part of her plans. Lucy craves adventure. When she and Ariana take it upon themselves to lure Ariana’s former abductor into a trap, the consequences are far reaching.
Can Amos save the impetuous Ariana from her own folly? Will he allow his feelings for her to develop when he still mourns the death of his wife? Has Lucy’s thirst for adventure been assuaged, or can Raph persuade her that a future including him would be anything other than humdrum…
more
Amazon Other stores
Bookmark  Rate:

'Beyond the Duke's Domain: Ducal Encounters Series 4 Book 4' is tagged as:

Buy 'Beyond the Duke's Domain: Ducal Encounters Series 4 Book 4' from the following stores: