Gothika: Tales of Love and the Supernatural 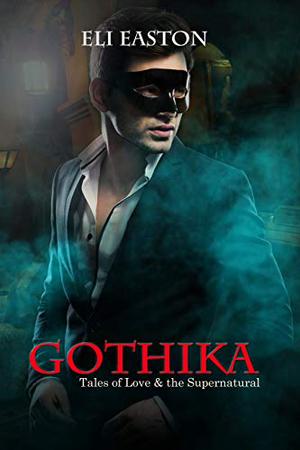 Immerse yourself in four tales of love and gothic horror in this anthology by Eli Easton. Each story is novella length.

"Reparation"
On the harsh planet of Kalan, weakness is not tolerated. When young spore farmer Edward suffers a carriage accident that kills his mail-order bride and his factory manager, Edward has little chance of survival, until Knox—an enormous “reconstitute” slave—plucks him from disaster.
Recons are part machine, part human remains from executed Federation prisoners. But Knox is different from other recons. He can read and has flashes of brilliance. With no one else to rely on over the bleak winter, Edward forms an alliance with Knox, and against social taboos, they become friends. Edward struggles against his growing lust for the large humanoid, and while Knox thrives in his new life, memories of his past torment him.
A twist of fate brought Knox and Edward together, but there will be a price to pay in blood when they learn how deeply their lives truly intersect

“The Bird”
Colin Hastings is sent to Jamaica in 1870 to save his father’s sugar cane plantation. If he succeeds, he can marry his fiancée back in London and take his place in proper English society. But Colin finds more than he bargained for on the island. His curiosity about Obeah, the native folk magic, leads him to agree to a dangerous ritual where he is offered his heart’s most secret desire—one he’s kept deeply buried all his life. What happens when a proper English gentleman has his true sensual nature revealed and freed by the Obeah spirits?

“Among the Dead”
Ever since his accident, Neil Gaven sees dead people. He’s isolated himself, unable to bear the constant barrage of sadness and grief. But a gentle ghost grabs his attention on the bus one day. He seems to understand, to have some secret to impart. Neil works to interpret the ghost’s clues. Then they lead him to Trist, a homeless young man who is also tormented by spirits. Are they two of a kind? Maybe together they can find a way to live among the dead.

"The Black Dog"
Constable Hayden MacLairty is used to life being dull around the tiny hamlet of Laide on the north Scottish coast. They get occasional tourists, “monster hunters” interested in the local legend of the Black Dog, but Hayden thinks that’s only a myth. A rash of sheep killings, a murdered hiker, huge footprints, and sightings of the Black Dog force Hayden to rethink the matter. With the help of Simon Corto, a writer from New York doing research for a book about the Black Dog, Hayden tries to figure out why the enormous hound is reappearing. Hayden finds himself strongly attracted to another person for the first time in his life. But between the danger stalking the hills, Simon’s inevitable return to New York, and Hayden’s mother’s illness, true love may be more of a phantom than the Black Dog.
more
Amazon Other stores
Bookmark  Rate:

'Gothika: Tales of Love and the Supernatural' is tagged as:

Similar books to 'Gothika: Tales of Love and the Supernatural'

More books like 'Gothika: Tales of Love and the Supernatural'   ❯

Buy 'Gothika: Tales of Love and the Supernatural' from the following stores: