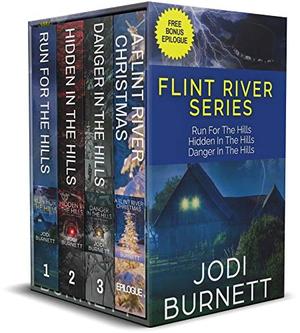 RUN FOR THE HILLS

Her stalker wants her for himself...
Or dead...

Equine therapist, Joscelyn Turner, escapes for her life to Montana where she meets two brothers--Trent, the charming rancher, and Cade, a darkly handsome Marine veteran running from his own demons.

When her past catches up with her, will Joscelyn reveal what she knows in time to save those she's come to love?


HIDDEN IN THE HILLS

Evil lurks in the hills of Flint River, Montana...

A Neo-Nazi terrorist is on the run from the FBI...

Will rancher, Trent Stone forgive his ex, Tonya in time to save her from becoming the next victim?


DANGER IN THE HILLS

While searching for terrorists and a mysterious woman in the woods of Idaho, Agent Jack Stone goes missing. A brutal blizzard hits the mountains, and Jack is caught in the storm—wounded and unprepared.

Can he survive the winter storm?

Just as Jack loses consciousness he glimpses the enigmatic woman. But is she friend or foe?

For the first time in over ten years, the entire Stone family is home in Flint River for Christmas. Mary Stone couldn’t be happier. The holiday season brings her a new love as well, in the form of Elijah Jefferson.

Everything is as it should be until a young woman goes missing and there is a robbery at the Gem Emporium. Mary never could have imagined the events that took place over of the next several days, nor did she know how necessary her particular brand of wisdom would be.

All books by Jodi Burnett  ❯