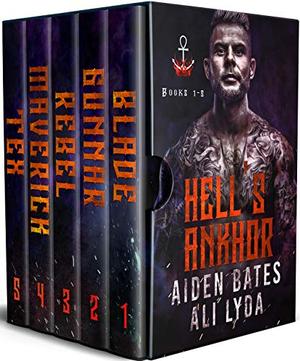 An MC President and his enemy’s son make for an explosive combination …
Blade has a motorcycle club to run and he doesn’t need a turf war on his hands. When a beautiful young man with haunted eyes walks into his bar, Blade’s protective instincts roar to the surface. The kid clearly isn’t made for MC life, but once Blade has had a taste, he can’t let go.

All MCs can burn in hell, as far as Logan is concerned. He’s seen the way his father runs his club, and he wants nothing to do with the life. But infiltrating Hell’s Ankhor is his one chance at escape, and now he’s in the crosshairs of the sexy as sin, President Blade. How can Logan resist the strong, protective man when he’s everything he’s ever wanted in a partner?

But Blade is still a big rough biker who will do anything to protect his club. What will he do when he finds out who Logan truly is? And how much destruction will Logan’s father cause when he finds his son in bed with the enemy?

Get Blade and 4 other fantastic books in the first of the Hell's Ankhor Series Bundles today!
more
Amazon Other stores
Bookmark Rate Book