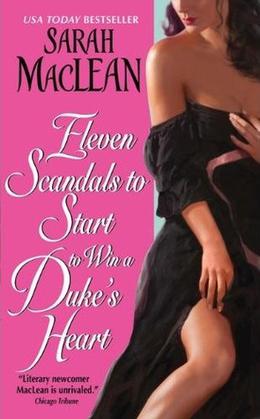 There is no telling where a scandal might lead...

She lives for passion.

Bold, impulsive, and a magnet for trouble, Juliana Fiori is no simpering English miss. She refuses to play by society’s rules: she speaks her mind, cares nothing for the approval of the ton, and can throw a punch with remarkable accuracy. Her scandalous nature makes her a favorite subject of London’s most practiced gossips…and precisely the kind of woman the Duke of Leighton wants far far away from him.

He swears by reputation.

Scandal is the last thing Simon Pearson has room for in his well-ordered world. The Duke of Disdain is too focused on keeping his title untainted and his secrets unknown. But when he discovers Juliana hiding in his carriage late one evening–risking everything he holds dear–he swears to teach the reckless beauty a lesson in propriety.

She has other plans, however; she wants two weeks to prove that even an unflappable duke is not above passion.
more
Bookmark Rate Book
Amazon Other stores

The 'Love By Numbers' series

All books by Sarah MacLean  ❯

Buy 'Eleven Scandals to Start to Win a Duke's Heart' from the following stores: