How to Marry a Marquis (Agents of the Crown #2) 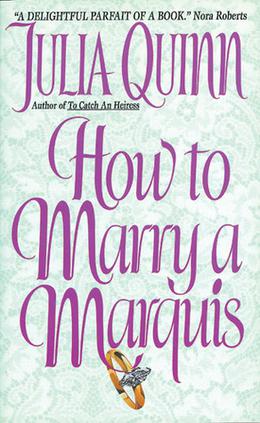 When James Sidwell, Marquis of Riverdale, offered to help Elizabeth Hotchkiss find herself a husband, he never dreamed that the only candidate he could propose would be himself...

SHE'S TRYING TO FOLLOW THE RULES
When Elizabeth Hotchkiss stumbles upon a most intriguing book, How to Marry a Marquis, in her employer's library, she's convinced someone is playing a cruel joke. With three younger siblings to support, she knows she has to marry for money, but who might have guessed how desperate she's become? A guidebook to seduction might be just the thing she needs—and what harm could there be in taking a little peek?

BUT HE'S MAKING HIS OWN
James Sidwell, the Marquis of Riverdale, has been summoned to rescue his aunt from a blackmailer, a task that requires him to pose as the new estate manager—and he immediately sheds suspicion on his aunt's companion, Elizabeth. Intrigued by the deliciously alluring young woman with the curious little rulebook, he gallantly offers to help her find herself a husband...by practicing her wiles on him. But when practice becomes all too perfect, James decides there's only one rule worth following—that Elizabeth marry her marquis.
more
Amazon Other stores
Bookmark  Rate:

'How to Marry a Marquis' is tagged as:

The 'Agents of the Crown' series

Similar books to 'How to Marry a Marquis'

More books like 'How to Marry a Marquis'   ❯

Buy 'How to Marry a Marquis' from the following stores: