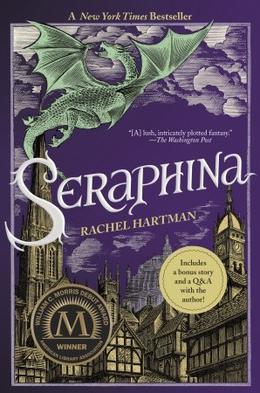 In her New York Times bestselling and Morris Award-winning debut, Rachel Hartman introduces mathematical dragons in an alternative-medieval world to fantasy and science-fiction readers of all ages. Eragon -author Christopher Paolini calls them, "Some of the most interesting dragons I've read in fantasy."

Four decades of peace have done little to ease the mistrust between humans and dragons in the kingdom of Goredd. Folding themselves into human shape, dragons attend court as ambassadors, and lend their rational, mathematical minds to universities as scholars and teachers. As the treaty's anniversary draws near, however, tensions are high.

Seraphina Dombegh has reason to fear both sides. An unusually gifted musician, she joins the court just as a member of the royal family is murdered—in suspiciously draconian fashion. Seraphina is drawn into the investigation, partnering with the captain of the Queen's Guard, the dangerously perceptive Prince Lucian Kiggs. While they begin to uncover hints of a sinister plot to destroy the peace, Seraphina struggles to protect her own secret, the secret behind her musical gift, one so terrible that its discovery could mean her very life.
more
Bookmark Rate Book
Amazon Other stores

All books by Rachel Hartman  ❯

Buy 'Seraphina' from the following stores: