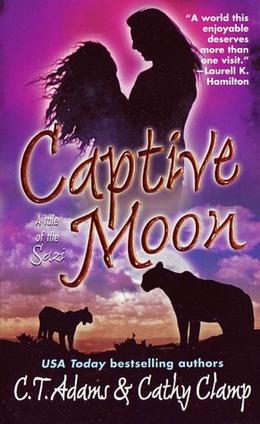 World-class entertainer and Sazi council member, Antoine Monier has taken his big cats all over the world without any trouble—until his latest trip to Stuttgart, where one of his tigers is stolen and killed. To Antoine's surprise, the German police have another tiger in custody—a tiger who is actually a lovely Turkish-American woman, Tahira Kuric.

But Tahira doesn't have a choice, because she and Antoine have discovered that she is a fabled "power well," able to store magical energy from other shapeshifters—and something is hunting her, eager to use her powers for itself.

Only if they can set aside their peoples' ancient rivalry and rely completely on each other—body and soul—can Tahira and Antoine save themselves and their people.
more
Amazon Other stores
Bookmark  Rate:

'Captive Moon' is tagged as:

The 'A Tale of the Sazi' series