All She Wanted (Letting Go #2) 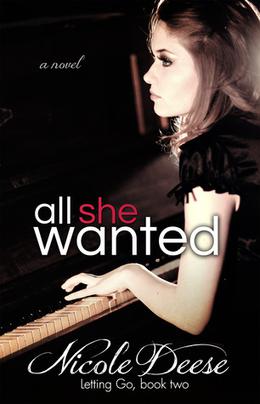 They determine how we live, who we are, and what we want.
Some choices are made for us. Others we must make for ourselves.

Charlie Lexington is a living consequence of both.

Everything about the feisty redhead represents a second chance—even her name. Though she was rescued at the age of five, her past is a lingering reminder of what she longs for most.

And the one thing she has spent a lifetime trying to find.

After a series of less-than-stellar choices, her Performing Arts Scholarship now hangs by a thread. Her sudden suspension has not only resulted in her father’s disappointment, but in the loss of her freedom as well.

She is forced to face the music: four weeks house arrest.

Briggs is the carefree, charming, yet all-too-mouthy fireman who is asked to keep an eye on the pretty little spitfire. He quickly learns, however, that his first assessment of her was off—she’s tougher than she looks. When her stubborn resolve pushes his sanity and intercepts his heart, his loyalties are put to the test.

Sometimes the hardest choice we make, is the one we must make for love…
more
Amazon Other stores
Bookmark  Rate:

'All She Wanted' is tagged as:

Similar books to 'All She Wanted'

Buy 'All She Wanted' from the following stores: