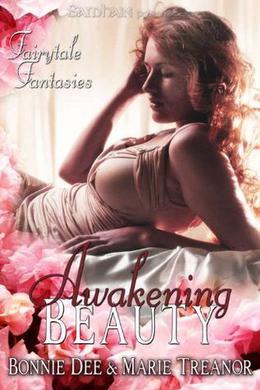 To fight this evil, they'll have to make love. Lots of love.

Joel Thorne feels as if he's been sleepwalking through his life. Wealth and success are his; now he's at a crossroads. Politics beckons, a move that would be made easier with a loveless marriage of convenience to his ambitious friend and ally, Vee Gabor. During a long mountain hike to clear his head, he discovers a castle overgrown with thorns and, inside, a beautiful sleeping woman.

When Princess Aurora opens her eyes, Joel's handsome face is imprinted on her heart - then she's swamped with grief and loss. An evil fairy tried to take her pure blood to gain power, and though her other godmothers fended off the worst of the curse, she's been asleep for a thousand years. Worse, she's been erased from history and from the memories of all she loved. True love brought her back, but to what future?

Despite their instant, strong attraction, Joel's practical nature wars with the possibility that magic is real. Yet with every touch, every kiss, the heat and emotion grow more real than anything he's ever known. Their union also reawakens something else. Something darker. An evil fairy's centuries-old vendetta that just won't die.

Warning: Contains explicit, edge-of-your-dreams sex, a newly minted hero in training, and a fairy princess who kicks butt for the man she loves. No fairy dust was spared in the making of this book.

'Awakening Beauty' is tagged as:

All books by Bonnie Dee  ❯