The Lady and the Officer (Civil War Heroines #2) 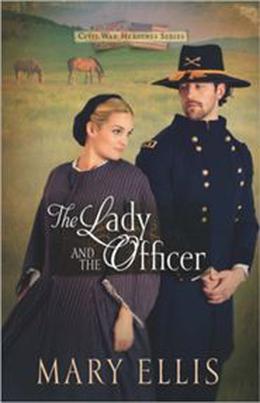 Bestselling author Mary Ellis (A Widow's Hope) presents The Lady and the Officer, Book 2 of her new Civil War historical romance series, which tells the stories of brave women and the men who love them.

Serving for a brief time as a nurse after the devastating battle of Gettysburg, Madeline Howard saves the life of Elliot Haywood, a colonel in the Confederate Home Guard. But even though Maddy makes her home in the South, her heart and political sympathies belong to General James Downing, a soldier from the North.

However, Colonel Haywood has never forgotten the beautiful nurse, and when he unexpectedly meets her again in Richmond, he is determined to win her. But while rubbing elbows with army officers and cavalry generals and war department officials in her aunt and uncle's palatial home, Maddy overhears plans for a Confederate attack in northern Virginia. She knows passing along this information may save the life of her beloved James, but at what cost? Can she really betray the trust of her family and friends?

Maddy's heart is pulled between wanting to be loyal to those who care for her and wanting to help the man she believes is on the right side of the conflict. Two men love her. Will her faith in God show her the way to a bright future, or will her choices bring a devastation of their own?
more
Amazon Other stores
Bookmark  Rate:

'The Lady and the Officer' is tagged as:

Similar books to 'The Lady and the Officer'

More books like 'The Lady and the Officer'   ❯

All books by Mary Ellis  ❯

Buy 'The Lady and the Officer' from the following stores: