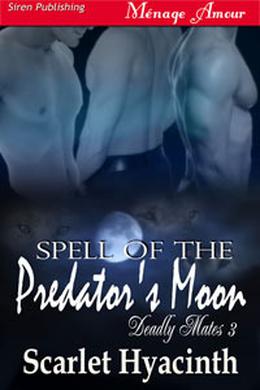 After Loren is rescued from certain death, he expects his savior to come and claim him. But three months pass with no sign from the other man, and Loren is tortured by confusing dreams and emotions. Unbeknownst to him, his mate, Tavon, has another lover, Yoshi, and Yoshi isn’t happy about Loren’s intrusion into their life.

In fact, Yoshi secretly harbors the same feelings for Loren, and he feels he is betraying Tavon in the process. None of them expect or understand a three-way relationship. True matings happen in pairs, and the confusion creates an abyss between the three.

With the threat of a dangerous conspiracy looming over them, Tavon, Yoshi and Loren find themselves swept away by forces more powerful than their own wills. Facing impossible odds, will they find a way to accept their feelings and be together before their enemies destroy them all?
more
Amazon Other stores
Bookmark  Rate:

'Spell of the Predator's Moon' is tagged as:

Similar books to 'Spell of the Predator's Moon'

More books like 'Spell of the Predator's Moon'   ❯

All books by Scarlet Hyacinth  ❯

Buy 'Spell of the Predator's Moon' from the following stores: