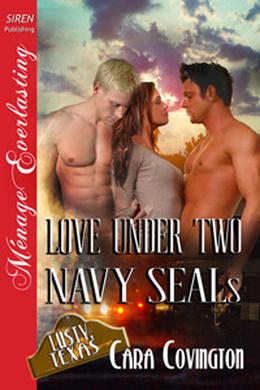 Julia Benedict fled New York City for her home of Lusty, Texas, after one unforgettable night making love under two navy SEALs. She’s fallen for them, hard. But Dev and Drew are the wrong type of men! They’re more Alpha than all the men of her family combined, and if there’s one thing Julia doesn’t want, it’s a pair of husbands who will boss her around just as her brothers have always done.

As Dev and Drew set out to court her, Julia begins to understand there’s a world of difference between bossy brothers and strong, caring lovers. But a case of mistaken identity finds Julia kidnapped. Her lovers must find her before she’s turned over to Miguel Ramos.

With Julia back home safely, the SEALs know their enemy will strike again. But as the men of Lusty gather to entrap the villain, it is the women who take the biggest stand—and the biggest risk.

'Love Under Two Navy SEALs' is tagged as:

All books by Cara Covington  ❯

Buy 'Love Under Two Navy SEALs' from the following stores: