Cross Your Heart and Hope to Die (Blackbird Sisters Mystery #4) 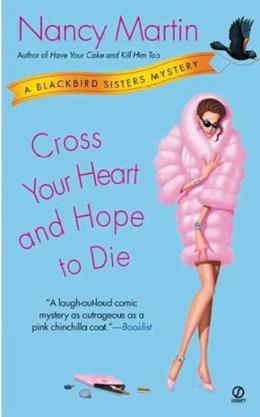 You could say my sisters and I are hot-blooded bluebloods with a flair for fashion—and for solving crimes. But things have NOT been going well for us Blackbirds: Emma has busted out of a very exclusive clinic. Libby’s hormones are in overdrive from selling paraphernalia for Potions and Passions, a company that promises its customers full satisfaction. And I’m still dating mobster’s son Mick Abruzzo, which keeps me in a permanent tizzy. At least, nobody in my vicinity has been knocked off lately. Oops—looks like I spoke too soon… A TEMPEST IN A C-CUP

Nora’s next journalistic assignment: the unveiling of the most miraculous bra in fashion history. But before Nora can hand in her uplifting story, her boss is found shot execution-style and trussed up in expensive panty hose—an Abruzzo family trademark. Now Nora must find the killer before her innocent lover takes the rap. That means shadowing the most glamorous suspects in Philadelphia—including a bad-boy designer, a former child star, a high-strung ad exec, and a pair of luscious twin models. Though Nora’s accustomed to upper-crust murder, cross your fingers for the Blackbird sisters, because this time, high society has never seemed so low-down dirty.
more
Amazon Other stores
Bookmark  Rate:

'Cross Your Heart and Hope to Die' is tagged as:

Similar books to 'Cross Your Heart and Hope to Die'

More books like 'Cross Your Heart and Hope to Die'   ❯

All books by Nancy Martin  ❯

Buy 'Cross Your Heart and Hope to Die' from the following stores: