Married to the Trillionaires (Menage for Mankind #1) 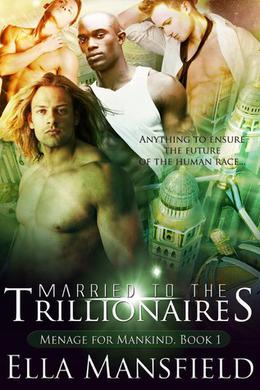 One hundred years after the decision to outlaw childbirth and move to a more humane form of procreation, the earth has very few females left. Most of those are unable to become pregnant, due to a faulty system. Trillionaires Bill, John, David and Steve band together and bid on an auction for one of the few “breeding females” left. They plan it out as coldly as they would any other kind of business deal, knowing that down the road, they will eventually sell off any daughters born of the union.

April, a young woman sheltered from the outside world, is told by her father that he needs money and will be selling her at an auction to the highest bidder. He does his best to protect her in the auction, but she has no choice in the matter. April goes into the situation with a positive attitude, not expecting to fall for the men so quickly. When she finds out her plans for the future of her children, she must decide if her love of the men is stronger than the love of any children she may bear.
more
Amazon Other stores
Bookmark  Rate:

'Married to the Trillionaires' is tagged as:

The 'Menage for Mankind' series

Similar books to 'Married to the Trillionaires'

All books by Ella Mansfield  ❯

Buy 'Married to the Trillionaires' from the following stores: