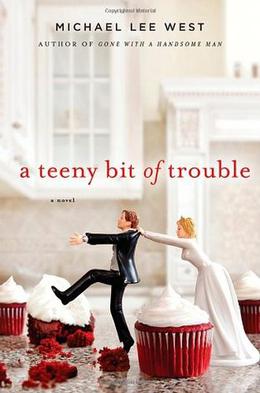 In this hilarious follow-up to GONE WITH A HANDSOMER MAN, Charleston pastry chef Teeny Templeton witnesses a murder and discovers that her laywer-boyfriend, Coop O'Malley, has been keeping secrets.

It’s not every day that I bake a dozen Red Velvet cakes, learn my boyfriend may have a love child, and I witness a murder.

After Charleston pastry chef, Teeny Templeton, witnesses a murder, she discovers that her lawyer-boyfriend, Coop O’Malley, has been keeping secrets: the victim’s ten-year-old daughter may be his child. As more lies explode, Teeny finds herself trapped in Bonaventure, Georgia, a zany“little Savannah,” where she must deal with her commitment phobia, gather DNA from a ten-year old child genius, outwit a stalker, decode an encrypted diary, and fend off advances of an ex-beau, a handsome plastic surgeon who’s crazy-in-love with her.  Teeny’s life gets maddeningly complicated by a series of not-so-teeny troubles: an uneasy love triangle, a gossip-mongering tarantula breeder, an wise-cracking Southern Belle with early Alzheimer’s, Coop’s loveable Chihuahua-toting granny, and clues that point to the illegal trafficking of human organs. But when a suspect is arrested, the bodies keep piling up and Teeny doesn’t know who to trust. As the murderers close in, Teeny unearths a revelation that becomes a game-changer and flips her world upside-down.
more
Amazon Other stores
Bookmark  Rate:

'A Teeny Bit of Trouble' is tagged as:

Similar books to 'A Teeny Bit of Trouble'

More books like 'A Teeny Bit of Trouble'   ❯

Buy 'A Teeny Bit of Trouble' from the following stores: