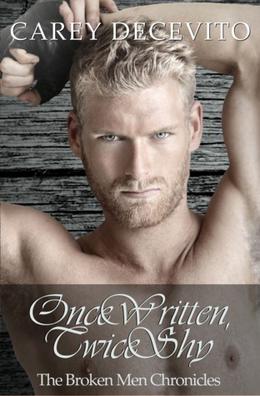 After a bitter marriage, Paxton seeks respite from his loss. Rediscovering his writing, he never expected creating a piece worthy of reading nor for two unsuspecting paths to cross in the most unconventional of ways.

Thousands of miles separated them, yet he’d never felt closer to anyone. Finding out that happiness and love was attainable again, was one thing. Having Alissa, was another.

When the two meet, sparks fly, chemistry is beyond explosive, and emotions reach a boiling point. Their brief love affair ignited the fuse but what Paxton neglected to anticipate was that his son would fall for the sweet, meek demurred woman in Alissa or the fact the woman would be their salvation…in more ways than one.

Written to make you laugh, cry, swoon, and heat things up, Once Written, Twice Shy is the first book in The Broken Men Chronicles series.
more
Amazon Other stores
Bookmark  Rate:

'Once Written, Twice Shy' is tagged as:

The 'The Broken Men Chronicles' series

All books by Carey Decevito  ❯

Buy 'Once Written, Twice Shy' from the following stores: