Son in Sorrow (An Intimate History of the Greater Kingdom #2) 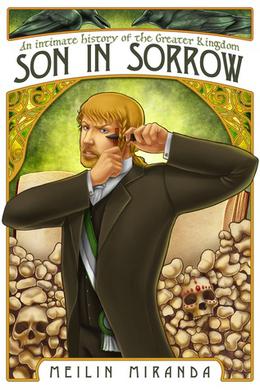 In this sequel to Lovers and Beloveds , MeiLin Miranda continues the saga of the Antremont family, kings of one continent, would-be emperors of another, and subjects to the whims of gods.

For a thousand years, the trapped, immortal Teacher has carefully planned escape. Now it all depends on one young man whose heart is tested like never before.

Estranged from his father, Prince Temmin Antremont struggles within the Lovers' Temple for peace of mind. A murder rips away his greatest support. His forbidden love of Allis Obby, the human host of a goddess, may get them both killed. And all the while, enemies inside and outside the kingdom are plotting against the monarchy, and the gods prove once again they are no one's friends.

Set in a Victorianesque world of magic, sexuality, political intrigue and military conquest, Son in Sorrow is the second book in the epic fantasy series An Intimate History of the Greater Kingdom.
more
Amazon Other stores
Bookmark  Rate:

'Son in Sorrow' is tagged as:

The 'An Intimate History of the Greater Kingdom' series

Similar books to 'Son in Sorrow'

All books by MeiLin Miranda  ❯

Buy 'Son in Sorrow' from the following stores: