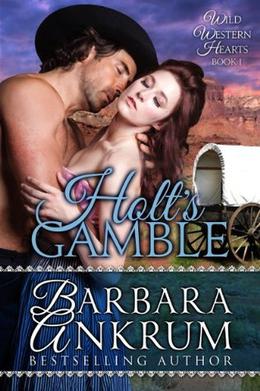 Kierin McKendry is indentured to J. Talbot, a ruthless saloon owner, until Clay Holt wins her in a rigged poker game. When Clay tries to collect his winnings, he's attacked by Talbot's men and badly injured.

Clay never expected Keirin to take him to the wagon train on which he was due to leave, or that she would lie about being his wife and nurse him back to health while on the trail.

But, Keirin isn't interested in a man consumed by avenging his wife's murder. She's pursuing her father, who sold her for a ticket to the California gold fields.

However, posing as a married couple, spending night after night together, is fanning Keirin and Clay into a different kind of blinding passion that's blazing the way for Talbot, who will kill to have what's his.
more
Amazon Other stores
Bookmark  Rate:

'Holt's Gamble' is tagged as: