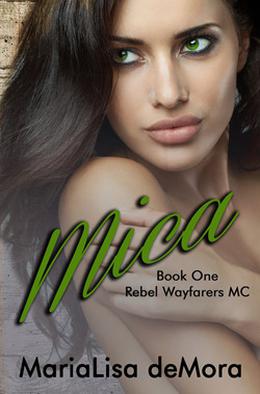 Mica Scott was raised on a ranch in Northeast Texas. Life was hard, but not impossible...until she met her own personal nightmare one night at a rodeo. She escaped his abuse by putting things behind her, isolating herself with a move to Chicago for college and work.

Davis Mason is the hard-living president of the Rebel Wayfarers, a motorcycle club operating out of Chicago. With just one encounter, he becomes determined to keep Mica safe...whether she wants him to or not. He will use every possible means in his control to manage Mica, while holding himself aloof from taking the one thing he really wants...her.

Daniel Rupert is a successful businessman. He owns a trucking company and a hockey team, for which he is the star forward. Meeting Mica and Mason when he helped foil an attempt on her life, he began working jointly with Mason to keep her safe. But unlike Mason, Daniel is not satisfied with a platonic relationship. He insinuates himself into Mica's life, and he only wants...everything.

Events escalate and Mica's very life hangs in the balance as old threats resurface and the men in her life scramble to keep her alive.
18 and older due to explicit content.
more
Amazon Other stores
Bookmark  Rate:

'Mica' is tagged as:

All books by MariaLisa deMora  ❯

Buy 'Mica' from the following stores: