The King's Harem (Tales of Tavamara #1) 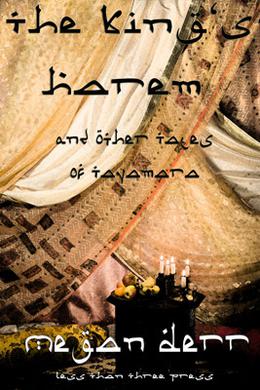 The King's Harem
The country of Tavamara is renowned for its famous Market, its decadent wines, the harsh climate in which it manages to flourish—and the infamous concubines kept by the members of the royal family. King Shahjahan’s harem is especially well known, for the men who comprise his harem come from all walks of life—a jaded court musician, a shameless pirate, a quiet monk, a prisoner of war, and a young horse trainer, all brought together by the devotion and love they share for their King.

Knight to Rook
Displaced by war, Rook makes a home in the Great Desert where his cousin Cordelia has become Princess. Once a strategist of unmatched ability, famous in the armies of his homeland, he spends his days in the Desert adrift and alone. With no way to use his skills, and held in contempt for his inability to use a sword, Rook can only watch and wait for a chance to prove he belongs amongst the Sons of the Sands.

Everything You Need
Though he left the Desert years ago and is set to become the next Advisor to the King of Tavamara, Ikram spends most of his days feeling slightly out of place, living a life of civility and calm that is hard to accept after a lifetime in the brutal, blood-soaked Sands. Eager to get away from the palace for a time, he braves the famous Market and finds far more than the soap which he had been seeking.

The Jewel of Tavamara
Fahima has always been the lesser sister; younger, plainer, too smart, too independent, and interested solely in the temples. She wants nothing more than to see her beautiful, popular, older sister married off to King Shahjahan so that she might return to her temples and be left in peace. But then her sister commits the ultimate taboo, and in order to save the lives of her family, Fahima must take her sister’s place—though she was never meant to be Queen, and could never hope to truly catch the notice of the handsome and compelling Shahjahan.

Note: Everything You Need and The Jewel of Tavamara feature het romances.
more
Amazon Other stores
Bookmark  Rate:

'The King's Harem' is tagged as:

The 'Tales of Tavamara' series

Similar books to 'The King's Harem'

Buy 'The King's Harem' from the following stores: