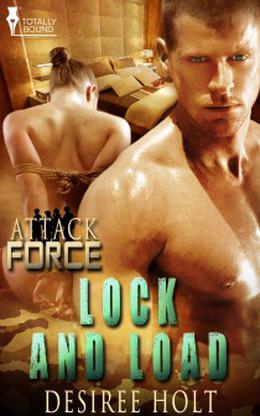 This is book two in the Attack Force series.

Two people who want a relationship built on trust yet neither believe in it…until he shows her how to accept his domination and she learns the true meaning of submission.
Beau Williams, the perfect sniper, has achieved success by closing himself down emotionally. He desperately wants to find a permanent sub who enjoys spanking and caning as much as he enjoys administering them, but he doesn’t know if he can open himself up to another person ever again.

Megan Welles is still struggling with her need to be a submissive. She wants a man who will give her that without destroying the strength she needs for her job as sports reporter. And she’s tired of hooking up in bondage clubs but never connecting emotionally with anyone.

When she meets Beau and takes him home for the night, something clicks between them, but how will they deal with the struggle to open up their emotions to each other?
more
Amazon Other stores
Bookmark  Rate:

'Lock and Load' is tagged as:

Similar books to 'Lock and Load'

Buy 'Lock and Load' from the following stores: