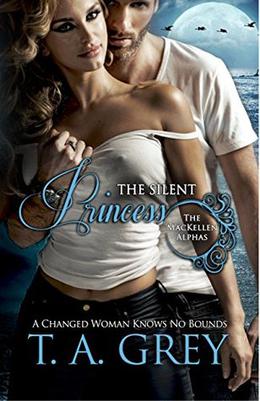 The Silent Princess (The MacKellen Alphas #2)

UNGUARDED…they find passion everlasting
Hanna MacKellen is done being dragged through life on a leash. After her former mate’s adulterous ways, she knows she can never trust a man again. Especially not another tough-guy type, who’d surely walk all over her. Steeling her heart is the only answer, one which allows her to dream that maybe, with her heart in check, she could taste the passion of a man who makes her body yearn.

CHAINED…they must come together
Alex Thompson is jealous of the attention Hanna MacKellen is receiving from French-Canadian Prince Remi Gerioux.  Perhaps some of his discontent towards Hanna could be attested to her new physical and mental transformation. No longer did she submit and standby. Proud and beautiful as a warrior goddess she could stand tall next to anyone.

And just as Hanna thinks she has control of her life, she is imprisoned by the formidable French-Canadian Matriarchy. If that wasn't enough, she's forced into slavery with a rough-bodied tough-guy whose gravelly voice shoots shivers down her spine—the one and only Alex Thompson.

But when Hanna's breeding cycle strikes, her unquenchable lust must be satiated. And while Hanna finds melting Alex’s resilient defenses to be almost as satisfying as his touch, and just as much fun, her actions land them in a heap of trouble, one that leaves Alex’s life on the line. Will she be able to save his neck…and her own too?
more
Bookmark Rate Book
Amazon Other stores

The 'The MacKellen Alphas' series

Similar books to 'The Silent Princess'

Buy 'The Silent Princess' from the following stores: