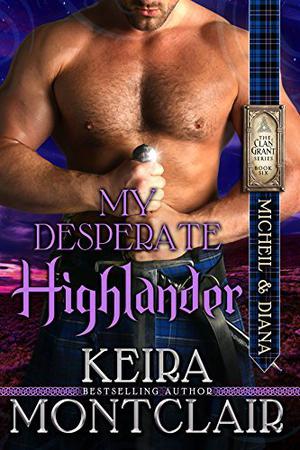 Diana of Drummond is frantic. Tired of waiting for her to choose a husband, her ailing father has selected one for her. Too bad the man he’s chosen could not be further from her childhood fantasy of the perfect knight. From the instant she meets him, she knows her betrothed would make a frightful partner. Lucky for her, the handsome, intrepid Micheil Ramsay is part of the group that escorts her to her betrothed’s home. He spirits her away and promises to save her from the ruinous marriage by helping her find the knight of her dreams.

Too infatuated with all women to select one, Micheil Ramsay is determined never to settle down. But when he rescues Diana of Drummond and brings her to Edinburgh to snare a husband, he finds himself swayed by her beauty, her bossiness, and her bravery. This is exactly the sort of woman he would take to wife…if he had not already decided to remain a bachelor. Now he finds himself in the position of trying to help the object of his affection woo another man.

As they embark on a rapid-fire quest to save Diana from her disastrous situation, Diana and Micheil find themselves battling their own hearts. Will they manage to overcome their preconceived notions and recognize the love that’s right in front of them?
more
Amazon Other stores
Bookmark  Rate:

'My Desperate Highlander: Micheil and Diana' is tagged as:

Similar books to 'My Desperate Highlander: Micheil and Diana'

More books like 'My Desperate Highlander: Micheil and Diana'   ❯

All books by Keira Montclair  ❯

Buy 'My Desperate Highlander: Micheil and Diana' from the following stores: