A Knight's Quest (Falling For A Knight #1) 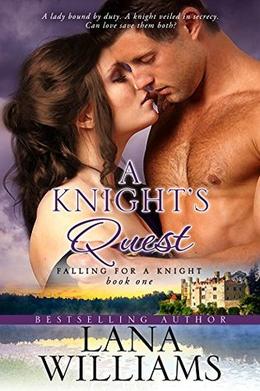 Lady Sophia struggles to gather the pieces of her life after the devastating attack on Berwick, Scotland, that tore her world apart. Now head of her family, she does all she can to keep them safe and help the people of her city regain what they lost. The arrival of an English knight raises her distrust, especially when he suspects her of stirring unrest.

Sir Garrick de Bremont’s secret mission in Berwick is to seek out signs of discord. His quest should be simple, yet nothing comes easily in this troubled city where no one is who they seem. The English are not welcome here, especially English knights, who laid siege to the city and killed thousands.

Sophia has no reason to trust this man but her attraction to him is undeniable. When he helps protect her, she realizes this is a knight like no other. Though he is English and she is firmly on the other side of the border, he makes her long for things that cannot be.

Rebellion brews in this bustling market city. Can Garrick uncover the cause before he and Sophia lose not only their love but their lives?
more
Amazon Other stores
Bookmark  Rate:

'A Knight's Quest' is tagged as:

The 'Falling For A Knight' series

Similar books to 'A Knight's Quest'

Buy 'A Knight's Quest' from the following stores: