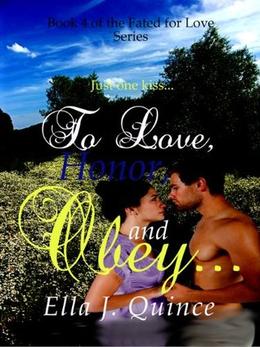 Chance returns home to his dying father. As the only son and heir, his family’s legacy rests in his hands. His father surprises him with one last dying wish—a wish for him to marry Miss Obedience Wickenham. Chance loves his father, but only agrees to consider it.

One kiss should reveal if he could ever feel anything more than annoyance for the girl who dogged his every step when they were children. That one kiss is his undoing, and he quickly realizes that he must have her forever and must convince her to marry him.

Obedience has always been infatuated with Chance. However, could she marry him as the duke’s last wish? She wants more than a marriage of convenience, but even if Chance can convince her with kisses of the passion between them, there is far more that stands in their way.

Her mother and sister have their own plan for the soon to be Duke of Maltravers. Obedience is torn between loyalty to her family and the love she has for the old duke and his son, whom she has only dared to love in her dreams.

Fated for Love Series:
Mine, All Mine
Sweet Torture
Storm on the Horizon
To love, Honor, and Obey
All available in e-book format soon to be in print!

A quick note*
I was previously published as D.L. Rose but changed my pen name. Why you ask? A couple of reasons. I didn't feel as though my first publication of Mine, All Mine represented me well and I wanted to distance myself from that. I initially chose to hide behind initials to be mysterious and ambiguous, because as a serious introvert it terrifies me to be "known" and judged.
Where did Ella J. Quince come from? She came from the heart of my desire to write, which stems from my passion to read. Ella is from Ella Enchanted by Gail Carson Levine. I was very moved by this fairytale, and it sparked my very first attempt at writing. J is for James, combined with the E in my name, to represent an author whose books inspire me, and got me through the hardest times of being a young wife with a sailor far away. For the same reason, I ended my name with a Q. The books by Eloise James and Julia Quinn were companionship when I had none, and an escape when I desperately needed it. My new pen name is a representation of everything that makes me a reader and writer.

The 'Fated for Love' series

Buy 'To Love, Honor, and Obey...' from the following stores: